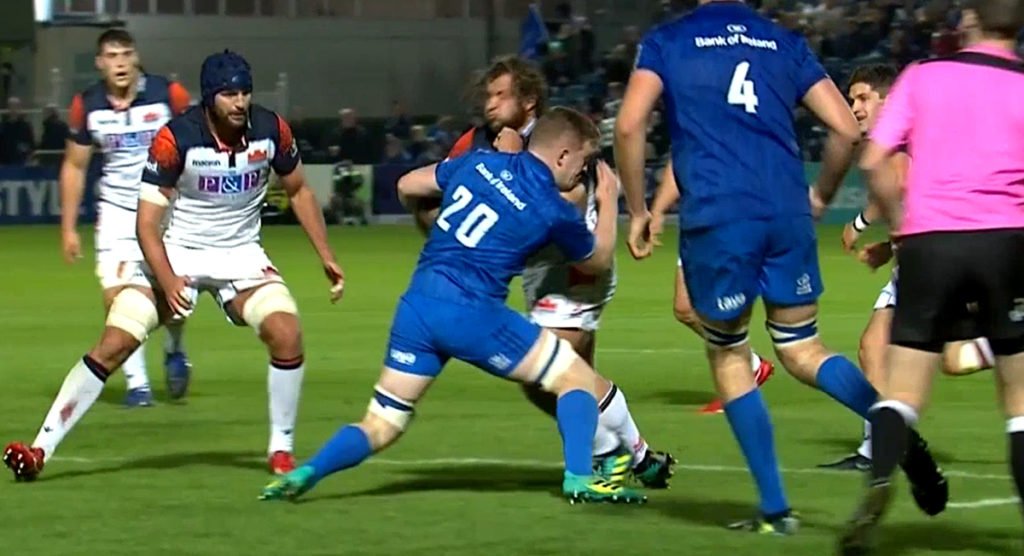 Edinburgh front rower Pierre Schoeman was sent for an early shower when his team faced Leinster in Dublin on Saturday. The former Blue Bulls prop led with the elbow, catching Dan Leavy in a routine looking carry. The referee had little choice, but some are not convinced.

Leinster beat Edinburgh without too much trouble at the RDS, picking up a 31-7 win with five tries to one.

Late in the game, their task was made even easier when South African prop Schoeman was given his marching orders. The 24-year-old accepted his fate, even apologising momentarily before leaving the field.

“It is a red card these days,” said disappointed Edinburgh coach Richard Cockerill. “You’ve got to protect people. I don’t think it was malicious from our guy if he’s dropping a fraction but look, it happens. It’s an accident more than anything and we know the consequences if it happens.”

While Schoeman appeared to look at fend Leavy in the chest with his forearm, the result looked bad and led to an HIA for Leavy, after he was knocked to the turf.

As mentioned in commentary, however, Leavy’s upright tackling may have contributed to the incident and perhaps reiterated the desire of World Rugby to get players to look at their technique, with hinging at the hips being something that may well be made mandatory in the game in the next five years or so. Like it or not.

Former Edinburgh forward Jim Hamilton did not agree with the red card, and he wasn’t the only one.

Another red card for Schoeman that imo isn’t a red in the Edinburgh vs Leinster match. Please tell me if I am wrong as I need to change my thinking from now on. pic.twitter.com/jVCMzgy5cL

How does the ball carrier protect himself from being tackled into oblivion? Touch rugby as derived by refs!! https://t.co/h5cIKzBOSt

Catch up on full highlights from the match below