Quade Cooper back in Australia until 2019 with new Reds deal

Quade Cooper has officially put pen to paper, signing with the Queensland Reds until 2019. The former Toulon playmaker heads back to Brisbane, where his career began in 2006, in a quest to add to his 107 Queensland appearances and 59 Wallaby Test caps.

Cooper played a season in Toulon with Matt Giteau and Drew Mitchell but has decided that it’s time to come home to where he grew up and has played the majority of his rugby.

Cooper said: “It was a tough decision as I believe the Rebels have a great Rugby program with some well respected coaches and a talented list but I feel that coming home to the Reds is the right move for me at this point.

“At the time when I decided to leave I felt that I needed a change and to experience something else. When I was away I started to look at my life as a whole. What made Rugby enjoyable to me was I got to do it in front of the people I love the most, which is my family and friends and that I got to play for the club that became such a huge part of my life.

“For me, when I think of Rugby and my life I think of the Reds. It’s a massive part of my life. I’ve been through the low times and the good times at the Reds and I want to be part of putting them back on top.

“I’m very much looking forward to working with Stilesy. I know he’s a good technical coach and that he’ll play a big part in the culture of the team. The list is one that I think can be successful in the near future and the long term as well.

“I’m now 28 and I want to build something that is sustainable for the future but also be apart of something that I believe will be successful in the near future and I believe that the Reds will be the place to achieve that.” 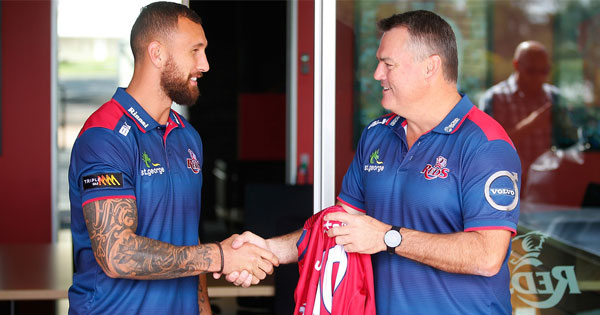 Cooper’s three-year deal will take him until after the 2019 Rugby World Cup in Japan, meaning he has every opportunity to become a Test regular again for the Wallabies.

“For me, playing at the highest level for the Wallabies against the best teams in the world, week in, week out is the ultimate, and it will always be the pinnacle of our sport.

“Being back in Australia and having the opportunity to play for the Wallabies is something that drives me every day and being around my friends and family in Queensland is equally important for me.

“We have a good opportunity in the coming weeks to put some of the hard work we’ve done into action, and I know my teammates and I are looking forward to the challenge that lies ahead.”