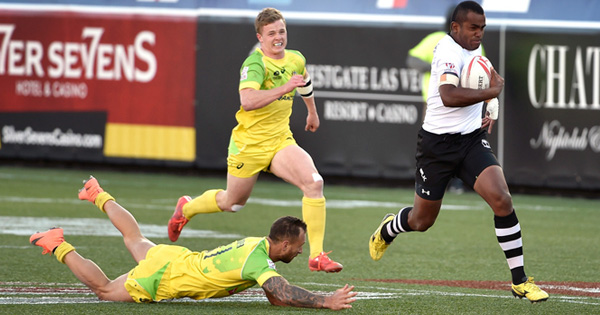 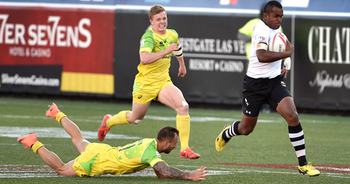 Fiji pulled off a miraculous USA Sevens victory by coming from 15-0 down to beat Australia 21-15 in the Cup Final on another thrilling day of action in Las Vegas. Wallaby flyhalf Quade Cooper had a forgettable final though, with a few errors that proved highly costly.

Just a week after devastating Cyclone Winston swept through the Pacific nation, Fiji pulled together to defend their title, after not having won a leg since the opening tournament in Dubai.

“To come up against Australia like that was tough, but we said 10 minutes is a long time and all we needed to do was to get back the ball to have a chance to win.”

Toulon and Wallabies star Quade Cooper, in his first 7s tournament, came on from the bench when Australia were already 15-0 up in the final. He looked to make a difference as he came close to the tryline for what could have been the match winning try, but coughed up possession.

It led to a sensational 100m plus effort from the Fijians, and signalled the end for Australia.

Cooper missed tackles, threw a crucial forward pass and lost the ball when it counted. It was a poor day out but one that a player of his ability will no doubt bounce back from.

Fiji’s victory gives them a five point lead at the top of the Sevens Series standings, ahead of South Africa – who were dramatically beaten by Australia in the semi finals – and New Zealand, who are on 86 and 82 points respectively. Australia are now in fourth place.

Hosts USA ended in fourth overall in Vegas, after losing to South Africa in the third-place playoff.

Blitzbokke Speedster Seabelo Senatla was the leading tryscorer overall, picking up 36 over the course of the weekend, followed by Fijian Savenaca Rawaca and Samoan Samoa Toloa, who both scored 27 tries.

Above is a short compilation of Cooper’s errors, and below is a full highlights recap