Quade Cooper's great try and big celebration against the Waratahs 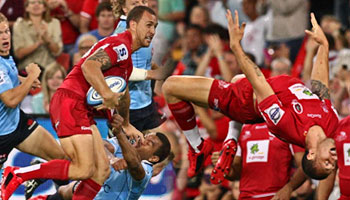 Quade Cooper scored a great individual try against the Waratahs on Saturday in a tight all Aussie battle at Suncorp Stadium. His celebration after the try wasn’t too bad either.

It was a tense game that had a test match feel to it with so much happening, including the unfortunate injury to winger Drew Mitchell. In the end it was a fairly low scoring affair, with the Reds breaking their seven year drought over rivals the Waratahs, winning 19-15.

It was the Reds’ seventh win in a row, their first time in Super Rugby. They’re rewarded with a top of the table spot, not only in the Australian conference, but overall too.

Flyhalf Quade Cooper, who actually had a bit of a shocker kicking from hand, produced this game breaking try that gave the Reds the much needed lead. Taking the ball without much momentum after a poor scrum, Cooper showed that he has great acceleration, ripping the Waratah defence apart before wrong footing Wallaby teamate Kurtley Beale.

While his kicking from hand was poor, in the last two matches he has progressed massively, keeping the opposition on their toes, pulling off the impossible at times. The 40 000 fans on hand in Brisbane were also treated to a Breyton Paulse speciality, with Cooper showing that its not just Digby Ioane who can have a little fun when scoring.