Questions from Round 13 of Super Rugby 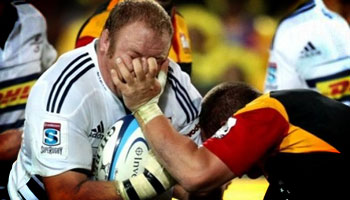 It’s the Heineken Cup final this evening, as the biggest game in European rugby takes place in Cardiff. And I’m in Edinburgh. But this is life, things don’t always go according to plan, as you’ll see in the short video below.

A return to Edinburgh was long overdue, having lived here over ten years ago. It’s a beautiful city and while rugby seems to struggle for popularity up here, it’s been good to see the marketing efforts of those pushing the Edinburgh Sevens, which takes place next weekend.

If you’re in the area, make sure you get along as it’s sure to be a good fun, and a could be an excellent introduction to the game for those who aren’t usually rugby fans, so drag them along. The same can be said for the London Sevens, which is taking place at the moment down south.

As for the rugby fifteens calendar, the Heineken Cup final kicks off in a few hours time, but then there’s also been some fantastic Super Rugby going on, with much more to come later today.

While there’s a few critics of the tournament due to it’s open, attack-minded style of play, you can also be sure that there’s always something entertaining happening. That’s the beauty of rugby, as often the small incidents make great viewing. With that in mind, here’s a few questions for you from last weekend, as asked by Reunion in New Zealand.

Time: 01:25
Thanks to Reunion on The Rugby Channel, Sky NZ

Questions from Round 13 of Super Rugby | RugbyDump - Rugby News & Videos