Radike Samo's IRPA Try of the Year 2011, vs New Zealand 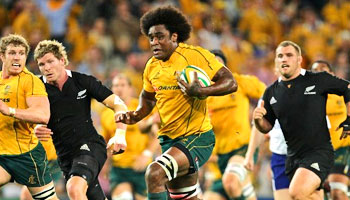 The IRPA Try of the Year award went to the Wallabies’ Radike Samo at the IRB Awards earlier in the week. He scored the try against the All Blacks in the Tri Nations and we featured it in the highlights then, but not on it’s own, so here’s another look at it.

It’s good to archive stuff like this, a fantastic try from a player who has been around the block. Samo has had a good run of form of late, and even turned out on the wing in the RWC. His hard running, big tackling, and good work ethic have prolonged his career to the point of him now being a Super Rugby and Tri Nations title holder.

This 60m solo effort against the All Blacks has now been recognised as the Try of the Year by the International Rugby Players Association.

“It’s a pretty awesome try for me because its my first test try. Something I’ll never forget, it’ll be there for the rest of my life so its all good,” he added.

Acura Niuqila, who played for Fiji, said that the try was typically Fijian, and shows exactly where the term ‘Flying Fijians’ comes from. “We Fijian players are like wine… the older we get, the better we become. I’m sure there is still much more left in Samo. He is in his mature age now. Thirties is the mature age for Fijian players. They are in their best form at this age,” Niuqila said.