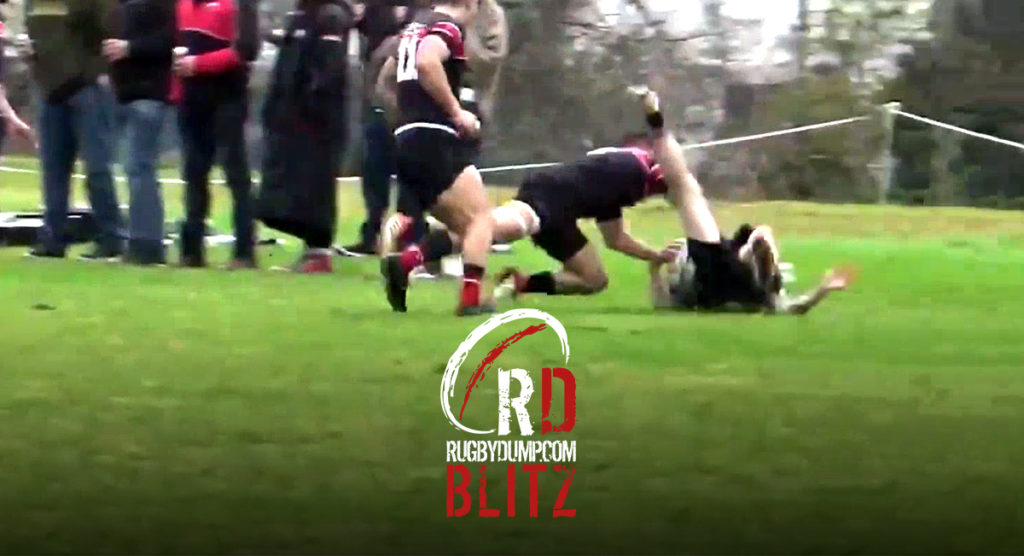 Keeping the Rugbydump Blitz clips coming, here are another two submissions that caught our attention, and for similar reasons. The one, in particular, made us think back to a classic moment from years gone by, while the other was just an out and out thumping tackle.

Yesterday we shared some quality tries so today we’re turning to some big hits, as the first tackle comes from Abbotsford away at Port Alberni (Canada), a high scoring game that the visitors won 45-32.

As you can see in the clip, and by the scoreline, it was quite an open game and after a counter-attack from deep, winger Darwin Guevara decided to put an end to things in no uncertain terms.

What started out looking a bit illegal was nothing more than a quality big tackle, and one that you’d struggle to call foul play, even in today’s climate. His look up and gesture was after the ref had actually blown his whistle for the late tackle that happened a few seconds earlier. Solid shot, Darwin!

This second is a short video but the big tackle looks very similar to that famous shot by Jerry Collins on Colin Charvis, the one that knocked him out and led to Tana Umaga helping out the Welsh flanker.

The crunching tackle was made by number eight Borja Lozano Pazos in a match in Spain between Universitario Bilbao Rugby Club and Ordizia Rugby. His victim was a second rower, who got crumpled by the well-timed hit.

Thanks for the submissions. Send yours via rugbydump.com/blitz and we’ll share the best of them