Reds lock Lukhan Tui gets banned for manhandling Will Genia 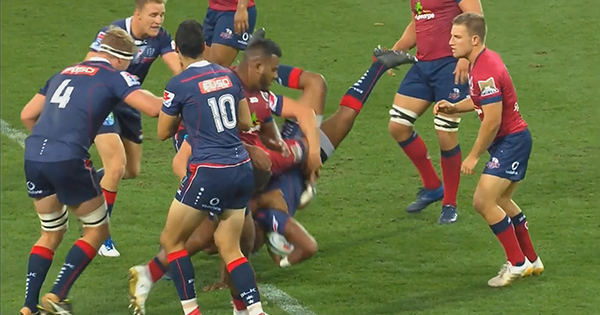 Queensland Reds second rower Lukhan Tui has suffered the same fate as Scott Higginbotham, after he too was suspended for a dangerous challenge during the Reds Super Rugby round two meeting with the Melbourne Rebels on Friday.

Tui was yellow carded for lifting and driving Rebels halfback Will Genia to the turf, with many thinking that perhaps the referee was gunshy after already red carding skipper Higginbotham earlier in the match.

Following a post match citing, a SANZAAR Judicial Committee Hearing found that Tui was indeed guilty of contravening Law 9.18 – A player must not lift an opponent off the ground and drop or drive that player so that their head and / or upper body make contact with the ground.

He has therefore been suspended for 3 weeks, up to and including Saturday 17 March 2018.

“With respect to sanction the Judicial Committee deemed the act of foul play merited a low end entry point of 6 weeks due to an absence of intention and other contributing factors.

“However, taking into account mitigating factors including the Player’s excellent disciplinary record and his guilty plea at the earliest possible opportunity, the Judicial Committee reduced the suspension to 3 weeks.”