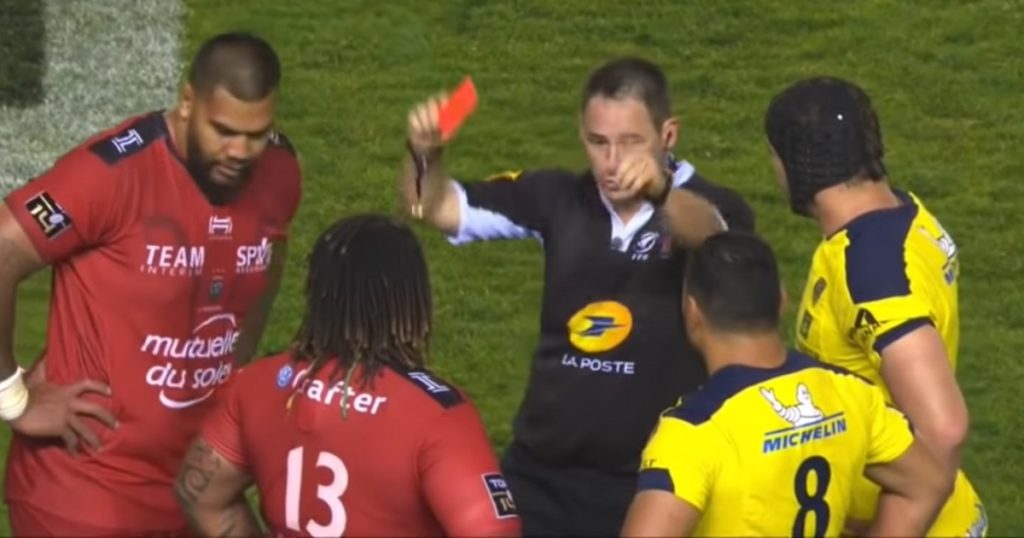 Having received his marching orders earlier in the season for a dangerous tackle against Bordeaux-Bègles, Taofifénua was dismissed by referee Vincent Blasco-Baque after using an “open palm to the face” on South African Flip van der Merwe following a fairly benign fracas at the side of the pitch.

Van der Merwe was shown a yellow for his part in the bust-up, although fans and the local Canal+ commentary team – who were forced to cut short a pitch-side interview with French national captain Guilhem Guirado, on his last appearance with Toulon before joining Montpellier – were largely at a loss as to why.

WATCH: Taofifenua banned for three weeks for kicking Stuart Olding in the head

Leading 24-11 at the time, the loss of Taofifénua failed to affect the result as Toulon recorded just their 11th win in 25 matches this season. They extended their advantage to 34-11 at the end, with Filipo Nakosi’s try following earlier efforts from JP Pieterson, Rhys Webb and Facundo Isa.

Clermont had a nightmare performance and slumped to their sixth defeat of the season, which leaves them an unrepresentative 11 points behind table-toppers Toulouse at the end of the regular season.

Frank Azéma’s side, already down to 14-men by the time van der Merwe was shown his yellow – thanks to Etienne Falgoux being sin-binned literally three minutes before – saw two more of their players on the sidelines before the end. Four minutes after van der Merwe left the field, Judicael Cancoriet was also shown a yellow, leaving Clermont farcically out-numbered 14 to 12 on the field.

George Moala was the final Clermont player to be sin-binned on the 80th minute, which almost doesn’t count seeing as the game was already lost, but it went some way to explaining just what state the second-best side in France was in at that time.

Toulon try scorer Webb copped a yellow card with 11 minutes to go, capping off a crazy 19-minute period where four yellows and a red was brandished.