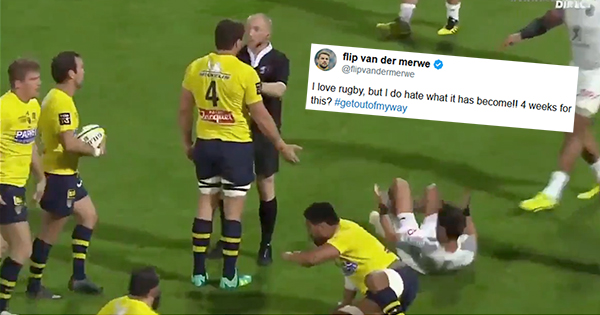 Clermont second row Flip van der Merwe was suspended for four weeks for pushing the referee out of the way in a recent French Top 14 match. This week he took to Twitter to express his disappointment in the decision, and in what rugby has become.

“I love rugby, but I do hate what it has become! 4 weeks for this? #getoutofmyway” tweeted the 36-times capped Springbok, along with the video.

In doing so, Van der Merwe shed light on the incident and received a large amount of support, with most echoing his sentiments on what was unfortunate but also appeared fairly innocuous.

Laying your hands on a referee is, of course, frowned upon and should never be done, it would appear that in this case he was merely moving the official out of the way as he was clearly blocking the lock’s entrance to the breakdown.

While perhaps he could have been gentler, the referee himself was not particularly bothered, and he and Van der Merwe had a very brief chat about it at the time, with no on field sanction given.

Some former players joined Van der Merwe in condemning the ban, most agreeing that it is harsh.

That can’t be right & it’s a joke if you got 4 weeks for that?
@brettgosper

“Crazy” tweeted Victor Matfield, while Bakkies Botha joked that if it were him, it would have been an eight week ban. Botha went on to say that he is happy he’s retired now, because [this type of thing] has become a joke.

This follows recent similar comments by James Haskell, who said that rugby is becoming a ‘pretty pathetic sport’, after he was penalised for a questionable high tackle.

It’s not the first time we’ve seen players in trouble for pushing referees.

So while those are heavier bans than what Van der Merwe got, the incidents themselves are all slightly different. Is the ban fair or are things getting a bit ridiculous? Let us know what you think

I love rugby, but I do hate what it has become!! 4 weeks for this? #getoutofmyway pic.twitter.com/lyT0H3ZOly