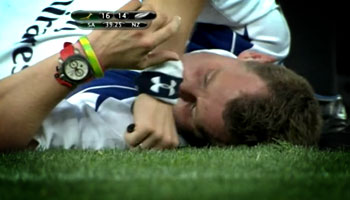 Yesterdays Tri Nations clash was packed with intensity as the Springboks and All Blacks battled it out in front of 94 000 fans. No inch was given and poor old Nigel Owens found that out the hard way as he got bundled over in a nasty collision.

As the second half approached, Jimmy Cowan made a dart off the back of a maul and as Bok flanker Juan Smith came across to close down the space, Owens got a shove in the back as he got in Smiths way.

Unfortunately referee Owens ended up in the middle of the tackle, with Cowan and Schalk Burger landing on the Welshman in what looked like a pretty messy position.

Luckily Owens was tough enough to get through it and his neck wasnt damaged, despite a short delay and needing to be attended to by a team medic.

– In other news, its since been reported that Dan Carter will undergo ankle surgery and will be out for eight weeks. He has been carrying the injury throughout the tournament and has opted to have an operation now after he said it was affecting his ankle movement.

– Francois Steyn looks likely to rejoin the Springbok team after he played a full eighty minutes for Racing Metro in the Top 14 last night. Steyn had been in South Africa but was supposedly injured, so went back to France.

If there are any incidents that you’ve seen over the weekend that you’d like featured here on Rugbydump send an email . That includes Tri Nations, Top 14, ITM Cup, and Currie Cup rugby.