Referee Nigel Owens - 'This is not Soccer' 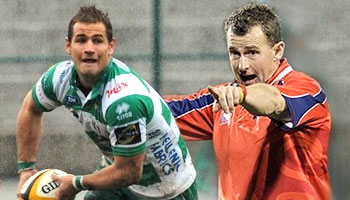 Munster beat Benetton Treviso with a bonus point 29-11 victory in their RaboDirect Pro 12 encounter at Thomond Park on Saturday night. One of the moments that stood out was this amusing piece of officiating from Welsh referee Nigel Owens.

Owens, a stand-up comic in his spare time, has never been shy to tell it like it is on the rugby field. About a year ago he called both teams into a huddle around him and told them all off.

In this game he pulled chirpy Treviso scrum half Tobias Botes aside and read him the riot act, introducing himself as the referee and going on to suggest that Botes thought they were engaged in a game of Soccer.

One might say that making such an example of a player in a deliberately humourous way when knowing the game is broadcast on TV is a little much, but it is good to see him take a stand against football-like protestations, that it’s safe to say nobody appreciates seeing on a rugby field.

His outspoken nature caused a bit of a stir shortly before Christmas however, as Ospreys coach Scott Johnson took exception to Owens’ use of social media. Johnson accused Owens of undermining his own authority by engaging with Welsh players and supporters on Twitter.

“It is driving me absolutely nuts it is permitted to continue and the sport can do without this. We have officials in places of supposed power, but we don’t need to learn their private business,” Johnson said of Owens’ habit of sharing his personal thoughts and feelings with his followers.

During the Rugby World Cup, at one stage he tweeted his support for Wales, and shortly after the tournament shared the personal news that his partner had split up with him and he was struggling to lift himself up for work.

“When you turn up at a game to play rugby, we have to respect the officials. But the respect button is not an easy one to turn on and off. We don’t need them in conversations with the players through these social networking sites,” Johnson continued.

“When I get 17-year-olds mocking the behaviour of officials, that is not good for our sport. It has gone completely too far. This is about the integrity of our sport.

“Last year he apologised for a forward pass he missed against us that Richard Fussell scored a try from. The public doesn’t need to know that. It is out of control.”

Below is the amusing incident with Botes, that Owens himself shared on his Facebook page. What do you think of officials sharing their thoughts and emotions through social media channels?