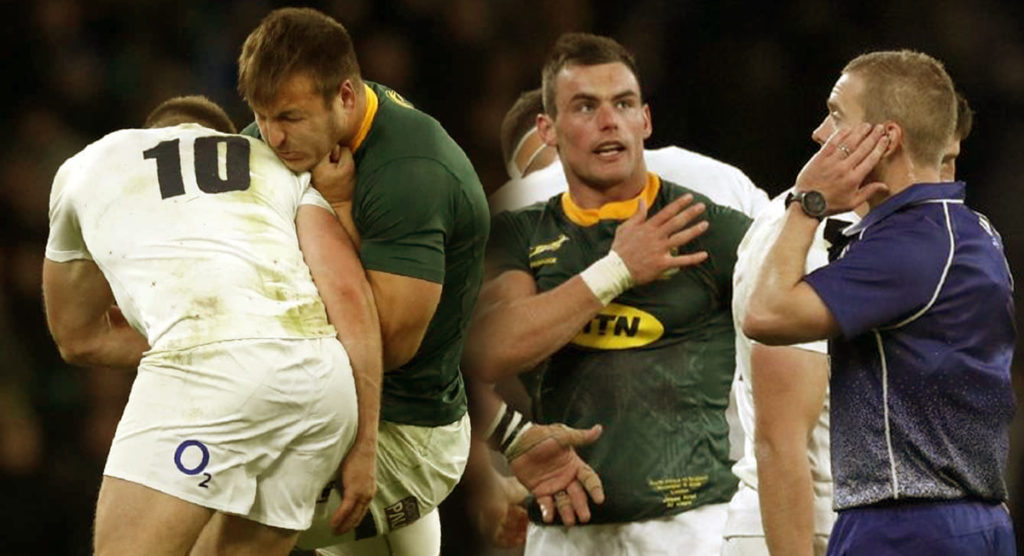 Australian referee Angus Gardner has told Sky Sports that he should have penalised Owen Farrell for the no-arms tackle he made on Andre Esterhuizen in the closing seconds of the England vs South Africa Test match three weeks ago.

The 34-year-old’s decision denied the Springboks a penalty and a shot at goal, which had they landed, would have won them a tight Test match at Twickenham. It has naturally been a huge topic of debate.

Gardner was awarded Referee of the Year at the World Rugby Awards in Monaco a few days back. He said there that if he could turn back the clock, he would change his decision.

“I think in hindsight now, having discussed it with some other referees… I think the general consensus would be that a penalty was probably the outcome there that should have been given,” Gardner told Rupert Cox on the Will Greenwood podcast.

[Flogging a dead horse but this is interesting]
A side by side comparison between what World Rugby have on their website as an example under dangerous play (Law 9.16), and the Farrell shot pic.twitter.com/OAmkQdp8Xj

Explaining why he saw it the way he did, he said: “The angles that I saw with the TMO, which were the head-on angles, showed a clear wrap of the front arm, but it was the back arm which got pinned.

“Of the angles that I was showed in the stadium at the time, that seemed to me to be enough of a wrap for me to constitute a legal tackle.

“It was never high, and so all we were looking at was the tackle technique. The collision itself also kind of swayed my decision because it was a big rugby collision, and we see these hits in the game.

“I suppose that’s the best way, just to be honest about it. If I made a mistake, I’ve got to put my hand up and say I was wrong, and hopefully if I see that again then I’ll know where I’m heading.”

While Gardner is a highly respected official, it is somewhat ironic that he was named the best referee in the world following one of the most debated incidents of the year.