Referee sandwiched between a prop and a hard place 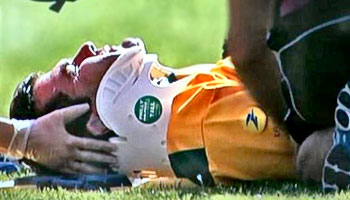 It’s a tough job at the best of times, but as French referee David Rosich found out when Bourgoin played Castres this past weekend, get yourself in the wrong position and you could end up leaving on a stretcher.

Over the years there’s been a few bad referee knocks featured here on RD, but this is probably the worst as I don’t recall the last time we saw an official actually carried off the pitch, on a stretcher, with a neck brace on.

Rosich got himself in an awkward position as he had his back turned, more than likely looking at the offside line, then got knocked from one side, and hit from the other.

The microphone on him created a similar effect to what we heard with Flip Van Der Merwe’s hit recently, except probably worse (better?). The impressive thing was that he managed to get the whistle in his mouth before hitting the ground, although it can’t be heard clearly on this clip.

The 39 year old was attended to immediately by the medics from both teams, and was put in a neck brace and whisked off to hospital for medical examinations. This clip condenses the incident though, and it did actually take a good 10 minutes to get him sorted out, perhaps because of the nature of a clash on a man not expecting it, hence the extra precautions taken.

“I was not expecting it and my body was completely relaxed. I was examined there and then the next day by the doctor,” said Rosich, who is meant to be officiating this coming weekend.

“I still have headaches,” he added.