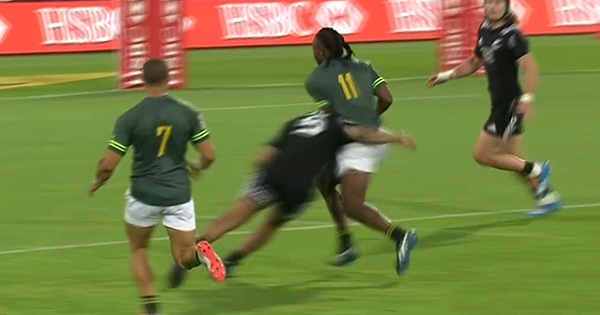 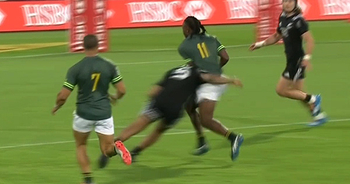 New Zealand pulled off a miraculous escape in the Cup Final of the Wellington 7s, thanks in part to this crucial big tackle made by Regan Ware. The hit not only resulted in an end to the attack, but also gave the All Blacks Sevens team a shot at victory.

South Africa were leading at the time so they probably could have been a bit more conservative, even though a try was there for the taking.

After Ware came in for the big hit on speedster Senatla, the ball was coughed up and judged to have gone forward by referee Matt O’Brien, who incidentally took quite a lot of criticism for his handling of the last five minutes of the final.

The hosts had come back from trailing 21-7 to score a dramatic late try as South Africa had a man in the sinbin. They ended up winning 24-21, claiming their fifth Wellington title in six years.

Sydney hosts Australia won the Plate with a 21-5 win over Argentina, Samoa won the Bowl and France lifted the Shield.

New Zealand moved from seventh to third on the HSBC World Rugby Sevens Series standings with 47 points, give behind Fiji who finished third in Wellington, and seven behind leaders South Africa.

World Cup winning star Sonny Bill Williams meanwhile had a mixed weekend, making some crucial errors but also coming up with the sensational pass that led to pool victory over South Africa.

While he experienced victory in his first ever 7s tournament, he knows there is lots to work on.

“It was a massive learning experience for myself and I’m just grateful to be playing for such a talented side,” said Williams. “The boys had to push themelves to their limits, to places you don’t really want to go. I’m just a bit rusty in some areas. Sevens is very fast and tough on the lungs, but I’m enjoying it and I know I got many things to work on.”

Below is the crucial hit by Ware, and you can view final day highlights below that