Rene Ranger has a go at the Digby Ioane turtle 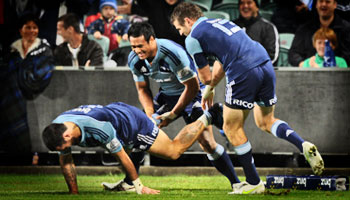 The Blues went top of the Super Rugby table after a 40-23 win over the Melbourne Rebels in Auckland earlier today. Rene Ranger scored twice, and had a go at a celebration of his own.

The home side started well with two early tries, but in typical fashion, the Rebels came back at them, with the game in the balance at one stage thanks to some good goal kicking from Danny Cirpriani. The former England flyhalf unfortunately let himself down with his defence though, as was clear to see on more than one occasion.

Rene Ranger scored the opening try within a few minutes of kick off, brushing off would-be tacklers while flying down the wing. The site producer didn’t pick it up initially, but Ranger and a few of the Blues boys had a go at the much hyped Digby Ioane celebration, in their own way.

While it was a bit of a pisstake, to be frank, it’s all in good spirits as Ioane himself tweeted earlier “Just saw ranger try!!!!! That is 2 funny:) the man!!!!!!”. Blues scrumhalf Alby Mathewson later said that they’d been practising it at the captains run yesterday.