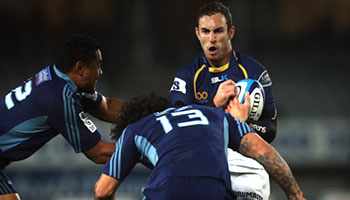 Rene Ranger appears to be unsure of what the future holds as he is reportedly trying to get out of the contract that was signed to join Montpellier in France later this year. He has been in great form, so could well be part of the All Blacks setup.

Ranger was included in the All Blacks training camp and with players like Richard Kahui and Tamati Ellison moving to Japan, Ranger has a decent chance of adding to his three Test caps.

He reportedly signed a hefty contract to play in France after the domestic season, but is now reconsidering and has said that his agent is doing what he can to rectify the matter. At just 26-years-old, playing for his country seems to be worth the apparent financial sacrifice.

“I’m still deciding. If the option is to stay then there’s things you have to deal with within the contract. Nothing is 100 per cent. It’s still a waiting game,” Ranger said a few days ago.

“If the opportunity is to stay then there could be a payout. I’m not to sure. The agent is dealing with that. I’m still deciding whether I stay or go. I told them [Montpellier] I’ve been in the camp. Whether Shag [Hansen] takes me or not I’ll just have to wait and see.”

Ranger’s strong Super Rugby form with the Blues makes him a fan favourite and his versatility, being able to play both in the midfield and on the wing, makes him an exciting prospect.

“I still see myself not in the frame. They’ve still got Conrad. Even if he takes a sabbatical they’ve got Ben Smith. Everyone is chopping and changing positions. Versatility is good, but will you be on the bench? Will you start? It’s one of those hard decisions,” he explained.

Conrad Smith has confirmed that he will take an end of year sabbatical, but he will be available to play against France, and then later in The Rugby Championship. This means Ranger would have a strong chance of making the overseas tour, which could make things worth sticking around for.

Against the Brumbies Ranger crossed for a try, but it was this punishing hit that sparked some life into the Blues performance. It’s not the first time he’s done that this year either.

As for scrumhalf White himself, he didn’t do his Wallaby aspirations any harm with a commanding performance that helped the Brumbies to a hard-fought 20-13 away victory.

Would you select Ranger in the All Blacks squad to play France?