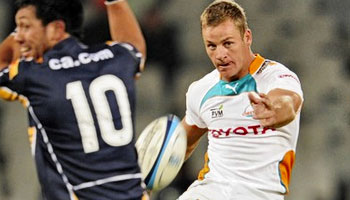 While it was a huge weekend for European rugby, here’s a quick clip from down south that is worth seeing, as Cheetahs fullback Riaan Viljoen slotted a massive drop goal against the Brumbies.

It’s not the first time we’ve seen him do it either. For a fairly small guy, he’s got amazing power in that boot, as was seen in the opening minutes of the Cheetahs’ Super Rugby meeting with the Canberra side.

This clip is featured today, but it was by no means the only good thing to happen in the game. In fact the home side, the Cheetahs, won 47-36 to pick up only their second win of the season. Nine tries were scored in all, and despite almost blowing a 25-0 lead, the Cheetahs hung on.

Of notable mention were the two front rowers for the home side, WP Nel and Coenie Oosthuizen. The latter came up with an audacious goosestep to go with his try, while Nel scored a nice one that included an upright dive whereby his feet almost hit the ground first.

Clips of those two will be shown during the week possibly. It was a bad loss for the Brumbies though, who now slump to their seventh loss of the tournament. They did earn and bonus point though, and will be buoyed by the news that coach Jake White will be joining them soon.