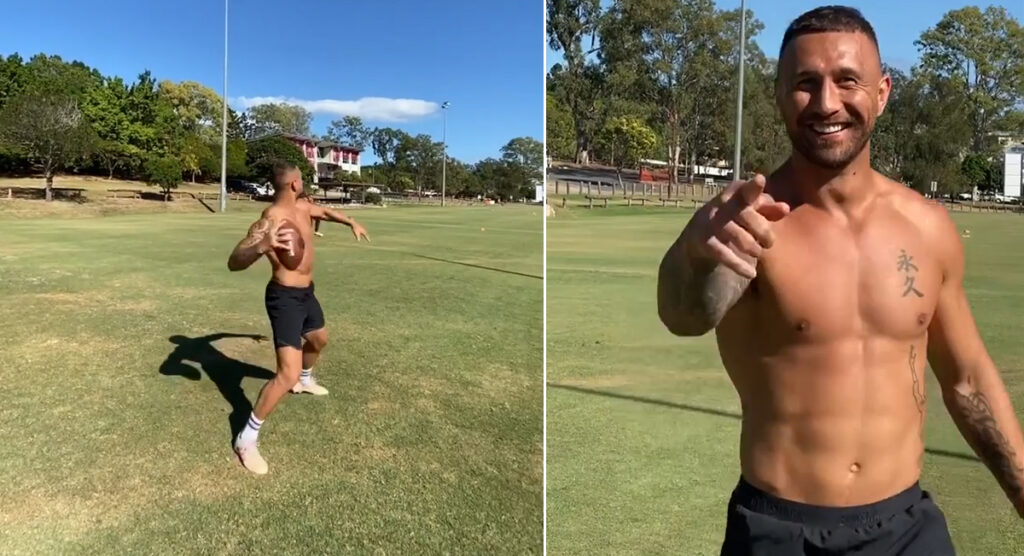 In a similar sequence of events to the first American football trick he made, Quade Cooper has impressed again with a cheeky pass that looked to have caught his mates off guard, yet was of course captured on camera for his social media followers.

While Super Rugby AU has just been announced, Cooper has clearly been keeping his discipline with training and diet as he looks to be in the shape of his life.

His training ground antics have gone viral in the last few months, and this latest pass is sure to do the same, even if it’s quite similar to what he’s done before.

Cooper has been in Brisbane during covid-19 lockdown, and has clearly made the most of it.

The 32-year-old caused a stir with his first passes, getting mass media attention around the globe and amassing a large number of views on his platforms.

As soon as travel restrictions lift, Cooper is expected to head back to Japan to link up with his Kintetsu Liners teammates, including Will Genia.

Until then, we can be sure to expect more of the same from one of the most talented playmakers the game of rugby has ever seen.

They laugh at me for being different.. I laugh at them for being the same 🤡 #imdifferent #alllovetothereceiver 🧪

Former World Cup winner Maggie Alphonsi has given her prediction for the Women’s Six Nations final on Saturday, as England seek a third consecutive title against 2018 winners France.

Watch: Hurricanes lock tears through Chiefs defence to score opening try in under a minute

The Hurricanes have opened their account against the Chiefs in swift fashion by bursting through the opposition defence to score inside the opening minute of the match.