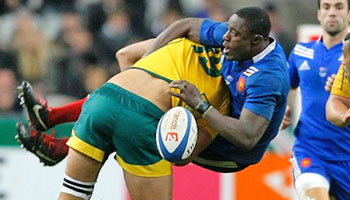 Wallaby Rob Simmons was the second big citing of the week following a bizarre few minutes during France’s emphatic 33-6 victory over Australia in Paris. Simmons will join Adam Thomson in London for their respective disciplinary hearings tomorrow.

The incident occured in the 65th minute of the Test as French loose forward Yannick Nyanga knocked on a high ball before Simmons, seemingly unaware, lifted and drove Nyanga to the turf.

The second rower, who came off the bench shortly before for veteran Nathan Sharpe, has since been cited for commiting a dangerous ‘tip’ tackle under Law 10.4 (j), placing him in doubt for the Wallabies next match, against England, this coming weekend at Twickenham.

In a strange twist of events, somehow referee Nigel Owens and neither one of his touch judges managed to identify Simmons, despite every other person in the stadium knowing exactly who it was, thanks to the huge television screen replays.

Unlike in some domestic competitions currently, the TMO is not allowed to get involved in rulings for foul play. Referees are also not meant to use the big screen TV replays for guidance, whereas with the new trial laws that has even been encouraged.

As a result, Simmons played on, and while rugby is a far cry from Cricket – where we see players walk if obviously guilty – the cut-throat environment of Test rugby has yet to see someone stick their hand up in a situation like this.

It would have been a grand gesture and yes, it’s unfair to expect such a thing, but in a sport that prides itself on integrity and honour, it would have been refreshing. It might have also helped at the disciplinary hearing.

Instead, we heard Owens having to apologise to the French team for not seeing who actually did it.

Discussion points:
– Do you think Simmons should (or would) have been Red carded for this tackle?
– How long would you suspend him for?
– In an ideal world, do you think that the captain or player owning up would have actually been good to see, or is that idea simply an unfeasible, romanticised view of the sport?