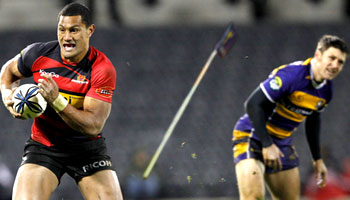 On Friday last week in the Plays of the Week segment you may have noticed a funny ending to the clip, with a quite hilarious bit of theatre from wing Ben Smith. Here’s the full incident.

Big Robbie Fruean has been featured on here a few times already, and the more we see him play, the more we realise what a beast he is. He’s also incredibly unlucky to be one of those talented individuals who has suffered from the massive amounts of top quality backs in New Zealand.

A few months back it looked as though Fruean and Sonny Bill Williams were destined to become the All Blacks’ new center pairing, featuring strongly at the World Cup. It hasn’t gone that way, and with Conrad Smith and Ma’a Nonu in the form of their lives, even the dangerous Williams is playing a supporting role off the bench. Fruean is yet to be selected at all.

That said, he’s a young guy and still has a huge amount of potential, which he’ll no doubt reach in coming years as he gets even stronger, more powerful, and more aware on both defence and with ball in hand. As it is, he’s a bit of a freak physically.

Bay of Plenty’s Ben Smith was obviously all too aware of that when he made the poorly judged decision to throw the ball at, then stand up to, Fruean in their recent ITM Cup match.

The massive Canterbury center had him pushed over on his back before he could say Whakatane, to which Smith replied as any little winger should do against a bigger man. He grabbed the nearest weapon that would make it a fair fight, and used it as a spear.