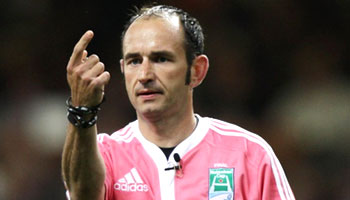 Leicester Tigers were frustrated by Ulster in round 5 of the Heineken Cup a few weeks back as they went down 41-7 at Ravenhill. Tempers boiled over in the second half, but referee Romain Poite maintained he was enjoying it.

Poite was criticised by Murphy after the game for his handling of various aspects, particularly the scrum, where the Tigers captain felt that everything went against them.

“The guys in the front row were frustrated with the way the scrum was refereed,” Murphy said.

“But we kicked away too much ball when we had it and we let ourselves get frustrated while they were composed. It was a very disappointing performance by us. However, it was a great one by them and you can’t say anything other than the better team on the night won the match.

“There is no point in crying over spilt milk,” he added.

Referee Poite had sent prop Dan Cole off in the first few minutes of the game, and things went downhill for Leciester from there. When Ben Youngs threw a bit of a tantrum in the 60th minute, Poite, Murphy, and Ulster captain Johan Muller came together for this rather amusing exchange.

“It’s a funny game. I enjoy, and I think you enjoy,” said Poite, to which Murphy replied quite frankly, “No I don’t.”

Despite the language barrier, Poite did a good job of defusing the situation and calming everything down for a bit, as well as allowing Murphy to to provide his blunt, honest response.