Romana Graham, his Dad, and a spectator fight it out in 2009 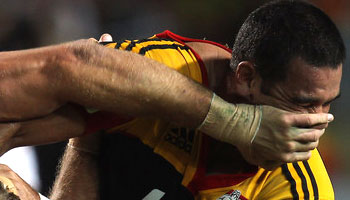 The incident with Imanol Harinordoquy’s father that was posted earlier today is reminiscent of an ugly brawl that occured in New Zealand a few years ago, where the roles were reversed as a father was fighting on the sidelines, so his son ran to his aid.

Romana Graham, who as you can see in the related posts isn’t afraid of getting his hands dirty, was minding his own business in the middle of the park when he noticed something happening on the sidelines. It turns out it was his old man arguing with another spectator, an injured prop from the opposition side.

Travis Church appears to shout onto the field as a player – Tau Moeke – is in the process of being yellow carded. Graham Senior, who in his time played for the New Zealand Maori, clearly didn’t like what he was saying so approached him aggresively but was then struck from behind by a friend or relative of Church’s.

Waikato lock Graham, who was playing for Hautapu against Hamilton Marist at the time, saw this and jogged across to help out, accompanied by team-mate Moeke, before they both got stuck in.

At the end a Marist player comes across with a piece of wood, adding to the bizarre scene which resulted in the two Grahams, Moeke, and Church all being suspended for four weeks each.

This one wasn’t in the RD archives somehow, so better late than never, here it is.