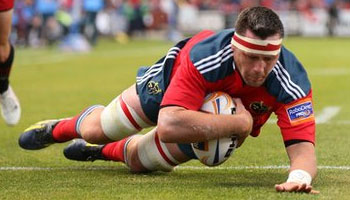 This Munster try video has been doing the rounds since the weekend, exciting a lot of fans out there who have compared it to Simon Zebo’s heel flick, and other great bits of skill. But was it intentional? Take a look for yourself and see what you think.

Munster beat Edinburgh 34-23 in the opening weekend of the RaboDirect PRO12, scoring five tries to two at Musgrave Park. There was one moment in particular that got the fans talking though.

James Coughlan scored in the first half after Ronan O’Mahony chased a Johne Murphy kick through. O’Mahony appeared to misjudge the bounce as he went to gather it, and it didn’t quite sit up as hoped. Instead he ran over it, and somehow a trailing foot flicked it up perfectly for Coughlan.

Some fans have emailed RD saying it was a brilliant bit of skill, and that he was a great age group footballer so he must’ve intentionally flicked it up to his teammate.

We’re not as convinced, but let us know what you think in the comments below as we’d love to hear more views on it. You can also view highlights from the match on page two of this post.