Ross Moriarty gets inevitable ban after chokehold against Argentina 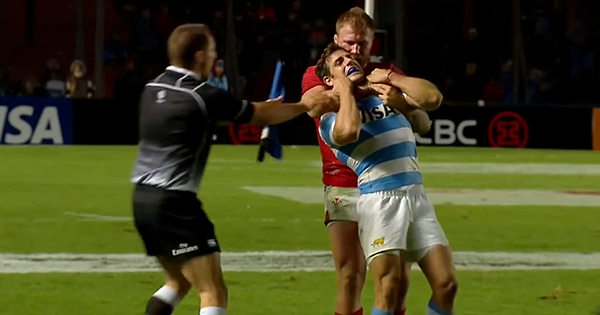 Wales number eight Ross Moriarty has predictably received a suspension for strangling Argentina flyhalf Nicolas Sanchez during their second Test last weekend. Wales won the game 30-12, but it was marred by the choke at full time.

The 24-year-old former Gloucester number eight admitted the act of foul play, accepted the red card and apologised for his actions.

“Having conducted a detailed review of all the available evidence, the Independent Judicial Committee deemed the offence to be at the mid-range scale of seriousness, which has an entry point of six weeks,” said the independent disciplinary judicial statement.

The suspension, based on Moriarty’s playing schedule, will end following the Dragons’ first match of the 2018/2019 Pro 14 season.

WATCH: Dragons Lair – Behind the Scenes at the Dragons

Dragons head coach Bernard Jackman told the BBC that he would have liked Moriarty to be available for the pre-season programme.

“I did not think there was that much in the incident. He was trying to protect himself after being attacked firstly and I thought he showed good restraint. It is done now and he has apologised for it.

“We are looking forward to getting Ross on the field so he can show the type of form he demonstrated in Argentina where he was outstanding.

“Ross showed why he is one of the most exciting back-rowers in the world and he is still so young.

“The reason Ross is so good is he plays with such aggression and physical commitment and that is such an important element to rugby,” said Jackman. “Over the last couple of seasons he has been on the right side of things and he will learn from this.

“It is important for us to create a good environment for him to get on with just playing rugby and being the physical imposing presence he is.”