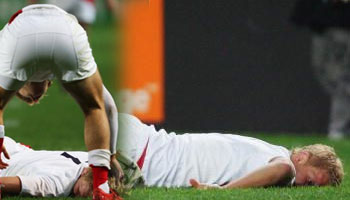 England played Tonga on friday night at the Parce des Princes in Paris. It was a do-or-die match, with the winner going through to the quarter finals, and the loser packing their bags for home.

Tonga packed their bags, but on the way to the final whistle they played their hearts out and were menacingly physical as always. Lewis Moody received the brunt of the knocks, taking two massive hits which would have kept most heavyweight boxers down.

The first of which was purely accidental, but brutal nonetheless.

The second was unfortunately worse than it was probably intented to be, but Moody took the Tongan captain’s shoulder to the chin, and it was very high to start with.