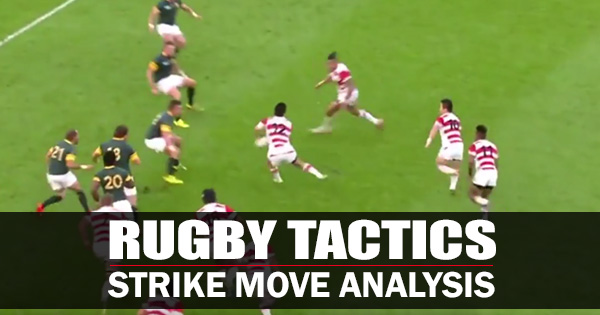 Today the Deadballarea takes a look a one of the most popular strike moves, or set plays, currently in use. We compare examples used most recently by Japan in the World Cup, but also see Australia and the Queensland Reds in action, giving us an idea of how the move can be done at all levels of the game.

One of the greatest sights in Rugby is when a well executed set play or “Strike Move” comes off.

It can genuinely be the difference between winning and losing a game, shattering a defence at exactly the right moment, leaving defenders’ confidence broken and handing the games momentum to the attackers.

The skills used are simple enough, just done under pressure, (2 vs 1 exploited via an inside pass. Note how the passer squares his shoulders to avoid a forward pass), but as we can see in the examples in this video the move requires players to perform a sequence of tasks in unison.

Each part of the move relies on the one before, creating a chain of events that ends with an opportunity for a line break. If players aren’t all on the same page, the move breaks down.

Players looking to use this move should practice decision making drills, like 2vs1’s and skills drills focusing on soft hand passing, before practicing the actual strike move.

Attackers should also not religiously stick to the first choice inside ball runner, changing the inside ball to a wide pass for example is an option that can also be taken. The key is to watch and take note of how defenders are reacting to what is unfolding, so practicing against a live defence is key to performing these moves effectively.

Perfecting these moves takes practice but are a useful weapon in any teams attacking toolbox.

If you want to receive regular drills and analysis for coaches, join us on Rugbydump Daily by clicking the button below: