Rugby Tactics: The Art of Attacking the Transition Zone 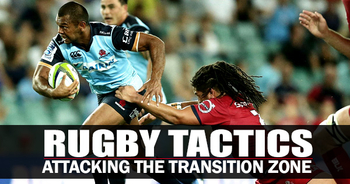 The Transition Zone is widely regarded as the area where the ruck defence links with the wider defensive formation. It’s a particular area of weakness as it’s the one point in modern Defensive Systems where teams essentially have two focuses of attention.

These two separate, almost clashing, responsibilities can often lead to a disconnect between the Ruck Guard defenders and the first defender in the line, often leaving that player covering a large area of space and feeling isolated.

Good attacking teams will be ready to exploit that disconnect and in the video we see how Kurtley Beale’s ability to straighten the attack, and use team mates around him often leads his team exploit this area with either a line break, or at the very least bending the defensive line backwards folding them in creating space further out.

We also see how this imbalance is particularly present in midfield defensive situations, including how the Chiefs use its occurrence at a midfield scrum to smash open the fragile Western Forces defence.

It’s more than just the inside ball, or attacking the inside shoulder though and it’s one of the few areas of defensive weakness that is present at every level of the game, from International Rugby right down to the local grassroots club.

Any team able to recognise when the opportunity to attack there is on can reap huge rewards.

As always please feel free to leave feedback, comments or suggestions for videos below.