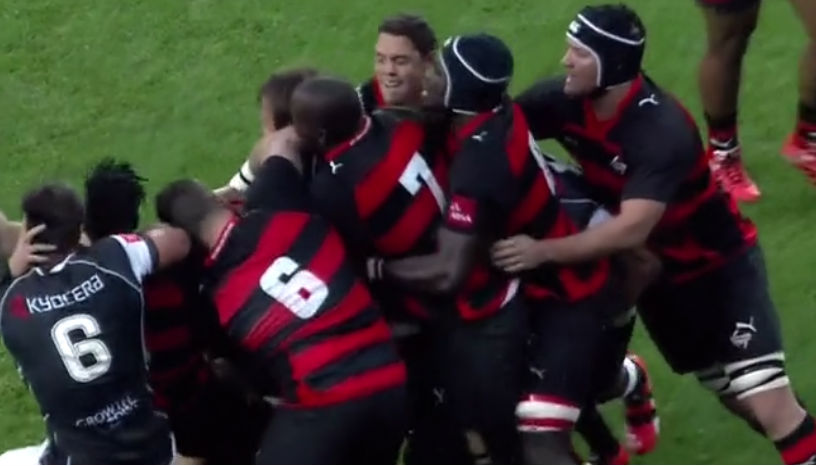 Blight on the game? Dangerous? Or innovative game changer?

This is the choke tackle that we’re sure to see a lot of in the Rugby World Cup.

The choke tackle, popularized by Ireland’s defensive coach Les Kiss in 2011 is when tacklers attempt to hold up the ball carrier to force a turnover. When the ensuing maul is formed and stops moving forward or collapses (and the ball is not immediately available to play) the team NOT in possession is awarded the put in at the scrum.

It’s worth noting that when the maul collapses, the defending players have no obligation to roll away or release the ball carrier (it’s not a tackle, remember). And if the ball is not “immediately available” the scrum is awarded to the defending team. In other words, the laws heavily favour the defending team because they’re able to lie on the ball and prevent it from being produced for the attacking team, thus forcing the turnover.

The Australia’s National Rugby Championship (NRC) is trialing new laws this season and stresses special focus on applying the laws of a maul (Law 10.4 (k) which prohibits intentionally collapsing the maul) to choke tackle scenarios.

Even though the concept of the choke tackle revolves around a maul being formed, they are often deliberately collapsed by the defending team once “maul” is called by the referees but not penalized. We can assume this is because the tackle, maul, and collapse happens very quickly and is often messier than a traditional line out drive.

You can see clearly in this clip, about 7 seconds in that Luke Watson doesn’t come close to joining the maul from his own side. In a lineout drive scenario, this would be picked up by referees immediately, but because of the hectic nature of the choke tackle, things like this get missed and advantage the defending team further.

At Rugbydump, we want our coaches to be the most informed, most up to date coaches around, so if you’re interested in getting more free drills and tactic updates like this then click the button: