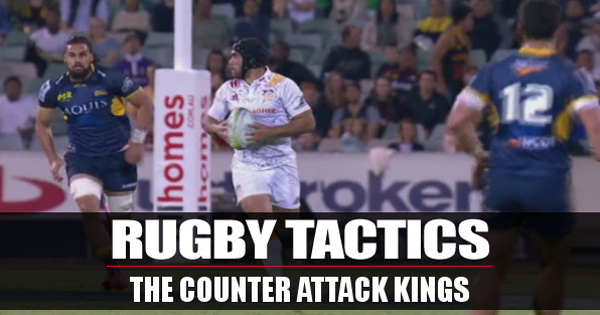 The attacking mindset of the teams in this year’s Super Rugby competition has been an absolute joy to watch. Intent has been front and centre of most teams game plan. With everyone looking to play with ball in hand we’ve been blessed with some truly brilliant tries.

That’s a pretty special strike rate, and they are essentially beating the modern structured defence by attacking when it’s not set.

So we’re going to have a look at how the Chiefs built their first try, by James Lowe, from a Brumbies mistake. We will also take a quick look at the first try from the Crusaders vs Lions game, which also came from a counter attack, that time from a turn over at a ruck.

There are also some wonderful examples of counter attacking play in the opening segment of the video from the All Blacks, the Exeter Chiefs and of course THE classic counter attack try from France.

Both of the main examples use simple systems: the Chiefs making sure they maintain a back three whilst also kick chasing, and the Crusaders clearly utilising the three pass rule from turn over ball.

Counter Attacking simplicity means it’s an excellent weapon that can be replicated through all levels of the game. Teams that put a premium on basic core skills, and importantly fitness, will be able to excel in this area.