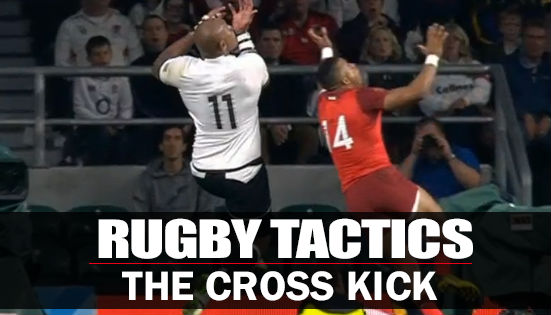 The cross kick is nothing new but this year we’re seeing it become a more refined and prevalent try scoring tactic.

Though it may appear to some as a 50/50 play to be used when a team has a penalty advantage and can afford to kick the ball with low-probability of scoring a try, nothing could be further from the truth as the video clearly explains.

As you can see in the examples, the chaser is coming from out to in whereas the defender is typically backpedaling into position. This tilts the odds of winning the ball in the air heavily in favour of the kicking team.

The chaser is able to see the ball the whole time during his run up, and therefore time is jump to perfection. The defender, by contrast, is having to leer up awkwardly at the ball whilst moving backwards; very difficult to do.

The defender can’t see the chaser coming and, even if he could, it’s very difficult for a man backpedaling whilst looking overhead to leap as high as someone running head on at the right speed. The chaser also is able to use his “hard parts” (i.e. shoulder, hip, and knee) to win the collision if there is one.

Of course the kick has to be pinpoint as well, but if you have an accurate kicker and a winger who is coached on the finer points of winning the ball in the air, this can be a very high probability play not just for a penalty advantage.

We send free drills and bits of analysis of what’s going on in the world of rugby coaching every week. If you’d like to receive these clips (they’re not all posted on Rugbydump) then click the button!