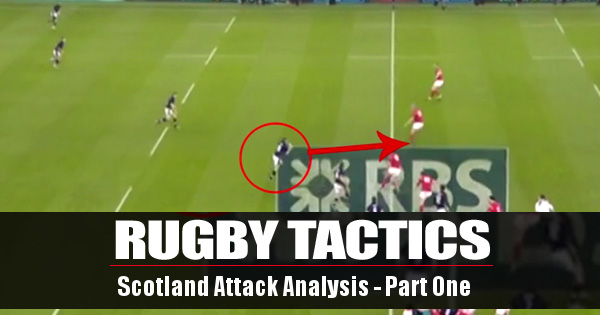 Scotland’s attacking play has been a shining light in a Six Nations tournament that’s so far failed to ignite the imagination. So we thought we’d take a look at their exciting brand of Rugby and highlight the key components in their attacking play against Wales and Italy.

The first of two videos looks at their opening try against Wales, scored by Tommy Seymour.

In a game where turnover ball from other people’s mistakes is becoming the likeliest way to score, it’s nice to see a team able to construct a fluid attacking movement, retaining the ball over a number of phases. In fact Scotland racked up a mammoth 21 phases before Seymour dotted down off a brilliant Finn Russell kick.

One of the reasons we like this sequence of play so much is the fact it uses a simple attack pattern that teams of varying levels will all be familiar with.

Sure there are some tweaks in there compared to most amateur teams, and key to how the pattern works is Laidlaw and Russell’s control on the team, but the bulk of the pattern is the exact Rugby you’ll be practicing at your local club or school ahead of the weekend’s game, just in a high performance context.

In part two we will be looking at Scotland’s attacking play against Italy and the attacking changes they made to counter the Italian defence.