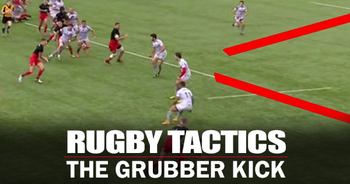 This week our Rugby Tactics feature looks at the resurgence of the Grubber kick in the modern game. It’s a tactic that seems to have fallen by the wayside in recent times as teams look to keep the ball in hand and work through the phases when in the oppositions red zone.

Positivity is to be encouraged but the best teams take their chances when they arise and in the video we see both Ma’a Nonu and Quade Cooper put it to good use to do just that.

Recently Saracens have also been using it as a weapon to turn rushing defences that are trying to shut down their expansive game, allowing their wingers and fullbacks the chance to outpace the turning defenders in the corner.

Two things that are really worth paying attention to in the video are how the Saracens players communicate when the kick is on, with Chris Ashton very obvious in signaling to Owen Farrell where he wants the ball, and Farrell’s excellent kicking technique when threading the ball through.

The end-over-end technique he uses keeps the ball’s path true and makes it travel in a straighter line than if kicked on the side. Additionally, topping the kick makes the ball pop up perfectly for Ashton as he crosses the line.

The kick is almost inch perfect. It’s clearly something they work on collectively in training, and something teams of any level can look to work into their attacking game plan by spending 5 minutes at the end of a session, with players practicing the kicking technique and the re-gather and then finishing of the kick to score.

Again we stress like previous tactics, it’s all about approaching it with a positive mindset. Overused it becomes predictable but used at the right time it’s devastating, with defences having pushed up hard struggling to turn and beat attackers with a head start back.

As always please feel free to leave feedback and comments in the section below. Let us know what you think of the videos and if there is anything you are keen for us to look at in more detail.