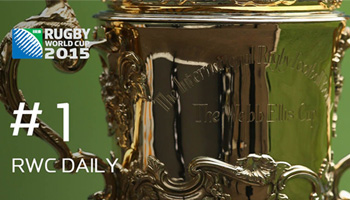 The World Cup kicks off on Friday and this year, as with in 2011, there will be an official daily show that highlights the best of the goings on around the tournament, called Rugby World Cup Daily. It should provide some interesting bits of behind the scenes footage, and keep you up to speed on what is taking place each day.

In this first episode for 2015, we get to hear from the champions’ captain, Richie McCaw, as he thinks back to the victory in 2011, and talks about how good it would be to win again this year. If the All Blacks can do it, it would be their first ever tournament win away from home.

We get to see the welcome and capping ceremony for Fiji, the first side to officially arrive at the tournament, and then there’s a great try from David Campese from ‘the vault’,

There is also a nice look at some footage from a few months ago when a whole host of stars, past and present, helped out at a third division club rugby match. Brad Thorn, Matt Giteau, Jonny Wilkinson, Bryan Habana and former coach Clive Woodward were all on duty on the day.

We’ll have more from RWC Daily throughout the tournament, all archived in our RWC Section