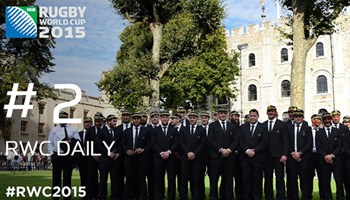 In this second episode of RWC Daily we see the the All Blacks arrive in England to defend the title they won in 2011. Coach Steve Hansen and skipper Richie McCaw talk about what it means to be there, and we look at a great try from Japan – who have also arrived – in 2007.

There is also an updated look at the latest World Rankings, with the Southern Hemisphere’s ‘big three’ back at the top, followed closely by hosts England.

We then see Japan’s welcoming ceremony, including words from coach Eddie Jones, who was actually assistant coach for the Springboks when they won the tournament in the same year that Japan scored that memorable try against Wales.