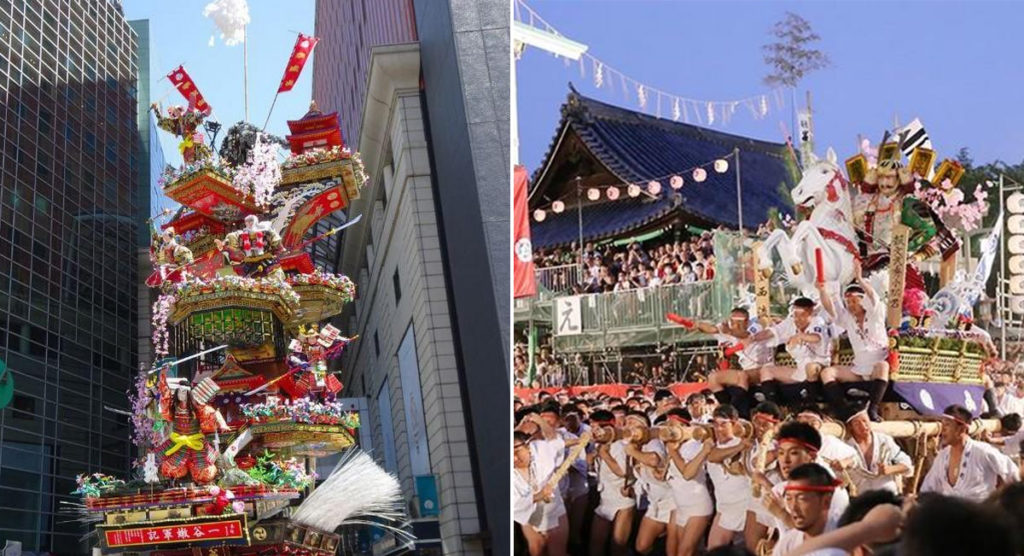 What is a Matsuri?

A religious event that welcomes God and deepens the connection between God and people.

There are many different forms depending on the season and location, and many people participate in the hope of health, safety and prosperity. In Japan, there are many festivals related to rice cultivation, such as praying for good harvest and celebrating good harvest.

About Matsuri in Kyushu

The westernmost area of Japan, the Kyushu and Yamaguchi regions have plenty that will wow you – majestically beautiful mountains, expansive coastal landscapes and other stunning nature as well as hot springs, fascinating history, culture and amazing food.

Few places do matsuri (festivals) quite like Kyushu. Each area has an abundance of incredible festivals – including traditional events that have been held for centuries, rich cultural experiences, carnival atmospheres, and unique traditions steeped in local culture.

About 40 festivals from nine prefectures in the Kyushu and Yamaguchi regions, all in one place! The extravaganza includes the “Big Five” festivals that have been inscribed on the UNESCO Representative List of the Intangible Cultural Heritage of Humanity, such as the Hakata Gion Yamakasa and Yatsushiro Myoken Festival.

A smorgasbord of the Kyushu and Yamaguchi area’s best festivals all together in Kumamoto city.

Here are some of the festivals you can enjoy at the venue.

NOTICE: The program is subject to change without notice. Check the website for details.

Gunners dressed in traditional armour give an impressive performance using weapons from the Edo period (1603-1868) .

The Iwakuni clan firearms troop perform traditional Ishida-style firearms displays. These are thrilling events, with the thunder of each volley drawing gasps from the audience.

Performances are held throughout the year, including on New Year’s Day and during the Kintai Bridge Festival.

Hakata Gion Yamakasa is held from July 1 to 15 every year. Beautifully ornate Kazariyama floats are set up on the street corners in the city for display and you can take a look at them while strolling through the city. Many people wearing happi coats (toban happi and mizu happi) can also be seen during the festival. Yamakasa can be seen all over Hakata City right up until the thrilling climax of the main race, Oiyama, in the early hours of the 15th (Sun).

The most popular Yamakasa events are Oiyamanarashi on the 12th, Shudan Yamamise on the 13th, and Oiyama on the 15th, in which you are actually able to see men run with Yamakasa on their shoulders. There are lots of other opportunities to see Yamakasa floats run through the town during Nagarekaki on the 10th and 14th, and at Asayama and Tanagaregaki on the 11th.

Hakata Gion Yamakasa is a dedicatory Shinto ritual of Kushida Shrine, which has been held for over 770 years and takes place between July 1st and 15th every year.

There are several theories on the origin of Hakata Gion Yamakasa, however, one popular account is that in 1241 Hakata was hit by a plague outbreak and Shoichi Kokushi, the founder of Jotenji temple, sprinkled the city with prayer water, cleansing it of the disease.

Originally, men carried 15 metre high Yamakasa floats and paraded slowly down the streets of the town. However, due to the risk of getting stuck on electric cables and lights installed during the Meiji Era (1868-1912), it was decided that they were more suitable for display purposes only and called Kazariyama (tall decorated floats). Shorter floats to be carried were then made, called Kakiyamakasa.

The official registration of Yamakasa on the UNESCO Intangible Cultural Heritage List on December 1st 2016 has seen more people than ever take an interest in Hakata Gion Yamakasa.

“Saga International Balloon Fiesta”, the largest international hot air balloon competition in Asia, is held every year for five days from late October to early November, with more than 100 balloon aircraft from around the world taking part. This year will be the 40th anniversary of the event. Many tourists come to see the spectacle of all the balloons taking off at once and the many character-shaped balloons. ”La Montgolfier Nocturne”, where balloons are illuminated by their burners in the evening darkness, also proves to be a very lively event.

YOSAKOI Sasebo Festival is one of the biggest events in Sasebo. The energetic dance performances are a must-see! You can enjoy around 170 teams performing at more than 10 locations including the Nakiri Festival Square Main Stage. You will be amazed by their strong performances as men and women of all ages dance to exciting music while beating a traditional naruko (clapping noisemaker).

The O-nobori Shink procession, the main event of the Yatsushiro Myoken Festival, is held every year on November 23rd. The procession departs Shioya Hachiman Shrine led by the shishi-mai (lion dancers), at 7:30 in the morning. Approximately 40 floats and other performances make up the procession, attended by 1,700 people, which travels about six kilometres to Yatsushiro Shrine.

Excitement reaches a fever pitch in the afternoon as the procession is introduced at Tosaki-no-kawara near Yatsushiro Shrine with performances by the shishi-mai and Kida, as well as the horse runs through the river.

A performance stage is set up at Tosaki-no-kawara. Both banks of the river are used for stands, filled by a large audience every year.

This is the biggest highlight of the Yatsushiro My?ken Festival and where the festival reaches its climax, including the full lineup of kasaboko (parade floats), captivating performances by shishi-mai (lion dancers) and Kida (an animal with the head of a snake and a body of a turtle), and horses running through the river, splashing water as they go.

(The above times are approximate.)

Period: The first Saturday and Sunday after July 20 each year

Historical background: Proper hikiyama floats have been built in the Mameda and Kuma districts since 1714, and the ones we see today have been built since the late Meiji period (1868-1912). Gion-bayashi, the traditional music played in the parade, was created in 1817 by Tokutaro Koyama, a detective in the local administration.

The purpose of the Hita Gion Festival is to ward off disease and destruction such as wind and water damage and pray for peace and safety.

In late July every year, Hita comes alive with the sound of Gion-bayashi music and spectacular 10m-high floats pulled to the accompaniment of soul-stirring chants. Held on the first Saturday and Sunday after July 20 each year, the festival is a 300-year tradition to ward off disease and destruction such as wind and water damage and to pray for peace and safety. Lavishly decorated floats are pulled through the streets of the Mameda, Kuma and Takeda districts. The excitement reaches its peak when night falls, with an elegant lantern procession through the mountains. You can see a preview of all nine floats in front of JR Hita station from the Thursday before the festival starts.

Local people host and dedicate Yokagura (night dances) to pray for a bountiful harvest. Gods and goddesses are invited to Kagura-Yado where Yokagura takes place and 33 kinds of dances are dedicated to them throughout the night.

Vows for the new year are made to the stirring accompaniment of taiko drums. The musicians wear masks of the nine Shinto deities to recreate a much-loved story from Japanese mythology.

At midnight and 2:00am on New Year’s Day, you can watch taiko performances recreating the legend of Tenson Korin, the descent of the Shinto deity Amaterasu’s grandson Ninigi from heaven, in front of the shrine office of Kirishima Shrine. Wearing white and pale purple costumes with masks of the nine Shinto deities, the musicians play taiko drums and hora (conch shell horns) to depict the deities’ arrival on earth from Takamagahara, their sacred dwelling place in the heavens. The enchanting atmosphere will leave you spellbound, and you’ll have no trouble believing that the powerful drumming could be heard all the way up in the heavens.

The whole of Yomitan Village comes together to put together the events of this festival, including the Akainko Grand Concert of Traditional Ryukyu Music, a concert named after a legendary figure in Ryukyu music and performed by over 300 local Ryukyu dancers and fans of traditional music, Uketsugo Yomitan no Kokoro (“Let’s Pass On the Heart of Yomitan”), a huge concert performed by local elementary and junior high school students and Shinkosen, a recreation of the ship said to have brought prosperity to the Ryukyu kingdom created with folk crafts by each residents’ association.