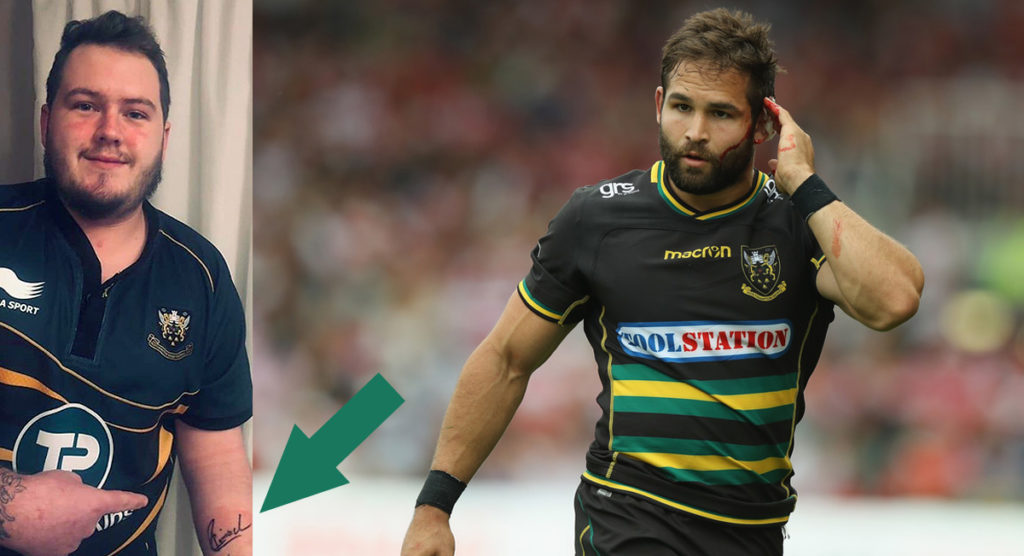 Never make a bet you won’t follow through on. That’s what this Northampton Saints fan has found out after his tweet got a fair amount of attention, leading to him stepping up to ink his arm with the signature of one of his favourite players.

By all accounts, Springbok capped number nine Cobus Reinach has been in sensational form for Saints in the Premiership. He was recently named Gallagher Premiership Player of the Month for December and with a little bit of luck and continued good form, may even find himself on the way to Japan later this year.

After another good weekend of form late last month, Saints fan Sam Mobley tweeted that if Reinach scores again, he’ll get his name tattooed on his arm.

“Okay, if @c_reinach scores on Friday against Chiefs I will get his name tattooed on me.. @SaintsRugby can we give him player of the season already? Quickly grab a signature off of him on a piece of paper titled ‘contract’ and have it expire in 2030..”.

Any tattooist in the Northampton area able to do a tattoo on Wednesday at 2pm please DM? Please help me 🙌🏼 RTs appreciated..

A day later, the tattoo was done.

“Hey @c_reinach the tattoo is done! You are now forever inked on me! A massive thank you to @SaintsRugby for the help sorting this all out”

Unfortunately for mega fan Sam, Reinach will not be playing when Saints take on Timisoara Saracens in tonight’s Europen Challenge Cup clash. But he will have a funny story to tell, and show, for life.

In December, @SamMobley19 tweeted saying if @c_reinach scored, he would get a tattoo in his honour…

This Saints fan stuck to his word so now has scrumhalf Cobus Reinach’s signature tattooed on his arm. Cool. 🤷‍♂️😂👏 . Reposted from @officialnorthamptonsaints – When you fully commit to a tweet ✒️