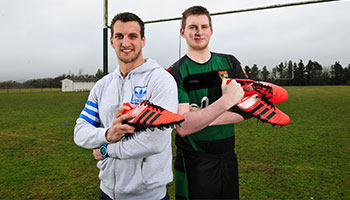 Carl hit the headlines in January 2015 as his rugby club, Trimsaran RFC, launched a search for some size 21 boots to replace the pair of 18s that Carl had been squeezing into and finally destroyed.

After Carl had been told by numerous people that such a boot didn’t exist and couldn’t be made, adidas secretly took on the challenge of making the biggest rugby boot the company has ever created.

Working from adidas HQ in Herzogonerauch, a team of adidas designers created two pairs of the brand’s Kakari model of boots – made for the biggest and most powerful players in the game – whilst Carl resigned himself to the fate of having to give up the game he loves.

On Saturday morning, Carl was surprised by adidas when his club’s Twitter account received a message from @adidasUK letting them know they had some boots for him.

There was one more twist in the tale though, with an unsuspecting Carl being delivered the boots by hand at his rugby club by Sam Warburton that afternoon.

Speaking after delivering the boots, Sam Warburton said: “As soon as the team at adidas told me about this story I bit their hand off to be involved. I’ve had my fair share of injuries and breaks from the game over the years and I know it’s one of the worst feelings you can have.

“It’s great to have been involved in getting Carl back on the rugby field and you can tell it means a lot to him and his teammates. I’m sure they’ll be reminding him that he has some big boots to fill now though!”

adidas is one of the leading producers of rugby boots, with four unique designs catering specifically to the different needs of players across the pitch. For more information on adidas rugby boots and apparel, visit www.adidasrugby.com.