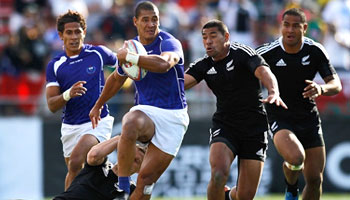 Samoa beat New Zealand 26-19 in a dramatic USA Sevens Final in Las Vegas, claiming their first tournament win of the season. Today we’ve got highlights for you from every day of the tournament, with some of the best tries, as well as some great tackles.

New Zealand aimed to pick up their third series win in a row but were undone by the mighty Alafoti Faosiliva with time up as the sides were tied 19-19. The huge man scored twice, with his second proving to be the winner for the Samoans, who had a huge amount of support in Vegas.

“It has been a long time and these boys have been working so hard, and I couldn’t stop a tear or two rolling down my cheeks,” said Samoa’s coach Stephen Betham. “The boys really deserve it and they owe it to the people back home and the fans here in Vegas. It has been a long time since our last Cup victory,” he added, referring to their last series win back in December 2010.

They have moved up to fifth spot on the overall standings, while New Zealand’s final placing puts them five points clear of Fiji at the top, on 92 points.

“Samoa deserved it, they came at us. We had a chance to win it, but it’s the team that makes the least errors that wins,” said New Zealand captain DJ Forbes. “But still disappointing, you have to be hurting getting that far and tripping up, but Samoa played well.”

South Africa and Fiji met for the third place playoff and it was the Fijians that won the game 21-15. Kenya won the Plate after beating Argentina 21-7, while Canada beat Australia 19-17 for the Bowl.

Below are highlights from throughout the tournament, including the final, in three short videos