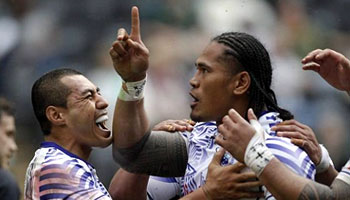 Samoa claimed their first ever victory over a bruised and battered Scotland outfit, winning 27-17 as part of the Kings Park double header on Saturday. The game forms part of the quadrangular series, and was played directly before South Africa vs Italy.

Alesana Tuilagi scored twice as the Pacific Islanders ended an eight-match winless streak against Scotland, who have since reported that up to 15 players suffered from injuries.

Coach Scott Johnson introduced six new caps, and with star players Stuart Hogg, Sean Maitland, Richie Gray and Ryan Grant over in Australia, depth was always going to be tested on this tour.

Samoa showed yet again though that they are no longer so called minnows of world rugby, playing a smart game and using their power to get the better of the Scots in humid conditions in Durban.

“It was nice to beat Scotland at last after losing narrowly the last time we met,” said stand in Samoa captain Paul Williams, who was skipper in place of David Lemi. “Scoring a couple of early tries gave us confidence and I am so proud of the efforts of our forwards.”

Scotland winger Sean Lamont, with 77 caps and plenty of experience, felt his team didn’t man up.

“We got bullied – in the cold light of day you’ve got to say big guys bullied us – and you should never get bullied in terms of physicality,” said Lamont.

“I might understand if we’d got out-skilled or out-played by a better team, but we got bullied. Yes, there were some good bits, but the fundamentals were wrong.

“A 14-point head start at international level against any opposition is difficult to get back, and right now it’s a big frustration. We are better than that. It always seems as if we need to have a poor start before we start to come together, and we have to stop it, as a team.”

It doesn’t get easier for Scotland as next weekend they’ll face the second ranked team in the world South Africa, in their own backyard.

“We come up against big boys week in week out; every team has powerful players, big strong runners and the guys know what they’ve got to do.

“And however physical Samoa were, South Africa will be as physical and have a nastier edge, so we have to step up now as a team. We know what we’ve got to do and how we can correct it.

“It’s just about getting down to it, getting rid of the slow starts and if we want to save some face we have to man up,” added Lamont.

Samoa take on Italy in Nelspruit on Saturday (15 June), followed by the Springboks vs Scotland.