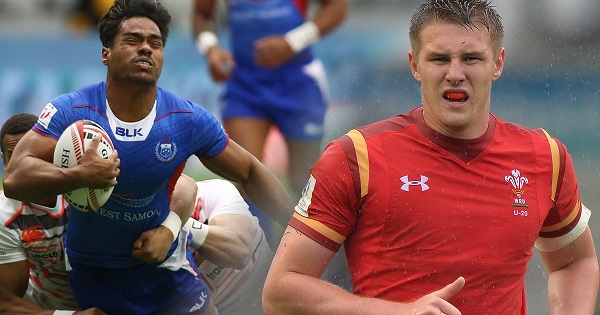 Samoa’s Gordon Langkilde is due to appear in court today on charges of assault after a tunnel incident with Welsh player Tom Williams at the Sevens Rugby World Cup in San Francisco. *SEE UPDATE BELOW

Langkilde is accused of aggravated assault and battery causing serious bodily injury which left Williams with facial injuries at AT&T Park at the weekend.

The two teams had just finished playing the quarter finals of the Challenge Trophy, which Wales – courtesy of a Williams try – won 24-19.

“Langkilde was taken into custody without incident at his San Francisco hotel.”

There is no doubt Langkilde will face severe consequences if found guilty, most likely a hefty playing ban. The eventual sanctions remains to be seen, but the fact charges have been pressed indicates a much more serious scenario than previous assault-like incidents we’ve seen.

In Feburary this year England’s Owen Farrell was involved in a tussle with some Scotland players pre-match in the tunnell before their Six Nations clash.

While this latest incident was off the field, some of the uglier scenes we’ve witnessed have sometimes looked like coming close to off-field sanction.

in 2011, Leicester’s Manu Tuilagi was handed a five-week ban – reduced from 10 – for what looked like an unprovoked, brutal punch on Chris Ashton.

The then Aviva Premiership disciplinary officer Jeff Blackett reflected on this incident by saying: “This sort of incident is very damaging to the image of the game. Had it occurred in the high street an offender would have been prosecuted in the criminal courts.”

Perhaps this latest case may set a precedent for on-field actions to be legally resolved off-field in a fresh drive for justice. We’ll keep updating this story as it develops.

Langkilde has been released from jail but has been ordered not to leave the United States, a report in the San Francisco Examiner outlined.

He pleaded not guilty to the four charges he faces for assaulting three Wales players. He was told to hand over his passport and also to stay away from the Wales 7s players Williams,  Luke Morgan and Ben Roach.

The 22-year-old must remain in the USA while awaiting trial for two counts of felony battery, one count of felony assault and one count of misdemeanour battery. If convicted, he faces up to four years in prison.

He had earlier appeared in court in handcuffs, wearing an orange sweatsuit from the County Jail. A far cry from representing his country at the Sevens Rugby World Cup.

He will next appear in court on Monday for a pre-hearing conference but it could take a fair deal longer before a trial takes place.

The altercation in the tunnel after their match left one Wales player in particular covered in blood after his nose and cheekbone were reportedly broken in the attack.