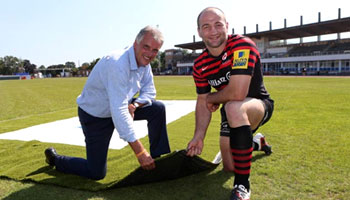 Saracens will make their Allianz Park debut today as their ground breaking new artificial pitch will be put to the test in the LV Cup (Anglo-Welsh) encounter with Cardiff Blues. The synthetic surface is the first of it’s kind for a professional rugby team.

The new pitch, which by all accounts looks, feels, and plays like grass, contains a rubberised shock-pad that is there to ensure player safety, complying with the required head impact criteria.

The turf on top of that replicates grassy conditions with one exception – there will be no mud.

Saracens are hoping that if all goes well, they will be able to increase their new stadium’s capacity to 15 000 for their Heineken Cup quarter-final meeting with Ulster in April. If they aren’t granted permission, they will have to look elsewhere.

For now though all focus is on the new pitch, which will have a lifespan of up to eight years.

“Chief executives at South African provinces, who you’d think are the most conservative people in rugby, are looking at ways of addressing the huge maintenance costs of their pitches,” explained Saracens chief executive Edward Griffiths.

“They’ve had an hour and a half-long discussion at board level about installing artificial turf at a Test venue, but said they would see what happens at Saracens first.

“Literally, the world of rugby from New Zealand to South Africa, from Wales to Murrayfield, is looking to see how this pitch plays and runs.

“All our evidence so far is that it will play magnificently well. Our expectation is that between three and five years the majority of rugby pitches will be artificial,” he added.