Saracens through to semi final after seeing off Ulster 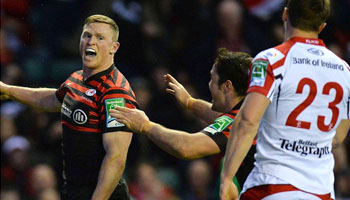 Saracens knocked last year’s finalists Ulster out of the Heineken Cup with a 27-16 victory at Twickenham thanks in part to a very well taken Chris Ashton try. Owen Farrel was also impressive, kicking five penalties and a conversion as Saracens took all opportunities afforded to them.

“Chris has had a lot of stick but he’s been great for us in the past three weeks and tonight he not only took his try brilliantly, but also defended superbly,” said Saracens’ Mark McCall.

“In truth, our defensive display in general was unbelievable against the best team we’ve played this season,” added the director of rugby.

They will return to England’s home of rugby to face Toulon in the semi final on April 28th.