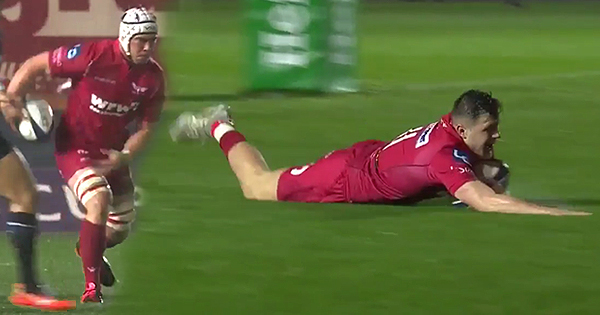 Rhys Priestland kicked Bath to an 18-13 win over his former team, but it was Scarlets that scored one of the tries of the weekend, as winger Steff Evans went over in the first half in wet and windy conditions.

Priestland, who played 157 matches for Scarlets, kicked six penalties from seven attempts, subjecting them to their second European loss in a week, effectively killing off their chances of qualifying for the knockout stages.

But it was the losers on the night who provided the most thrilling moment, as they scored a brilliant team try that featured some superb handling despite the incessant rain.

Evans made the break before passing to Gareth Davies, who held the ball then offloaded from the ground for Evans to recollect and dive over.

Referee Romain Poite checked with the TMO to see if the Evans pass infield was forward or not, but it was ruled that his hands went backwards, so the rugby gods smiled as the try was awarded.