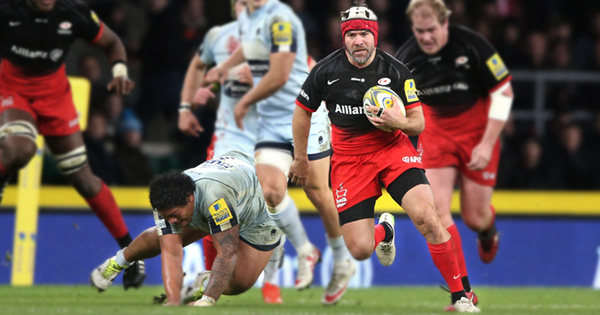 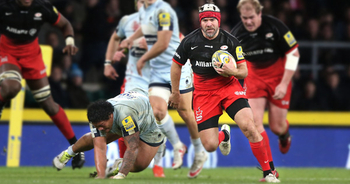 Chris Ashton scored twice as Premiership champions Saracens thumped Worcester Warriors 48-18 in the London Double Header at Twickenham on Saturday. Sarries scored six tries, but this one stood out due to the outstanding footwork from hooker Schalk Brits.

While Saracens scored a number of good tries, as did Worcester at the death, this effort caught the eye as 34-year-old Brits showed he hasn’t lost those magic feet he made his name with.

Charlie Hodgson did well to be on hand in support, and then arch poacher and finisher Ashton was there to score the try, and wasn’t able to resist the (in)famous Ash Splash celebration.

With the conversion, Hodgson became the first player to reach 2,500 Premiership points, a top accolade for the 35-year-old who recently announced that he will retire at the end of the season.

Saracens director of rugby Mark McCall was pleased for tryscorer Ashton, who scored his first of the season. “We’re all delighted that Chris scored. Like a good centre forward in football, Chris is one of those great wingers who judges everything that he does on scoring.

“If he doesn’t score then he’s not satisfied, which I think is a pretty good trait for a winger to have. In actual fact, his first six games for us this season have been as good as anything that he’s produced in his whole time at the club.”

Springbok Brits scored a try of his own, so you can see that and all the other highlights in the full highlights wrap on page two. See more of Brits in the Related Posts