Scotland get RWC campaign underway with convincing win over Japan 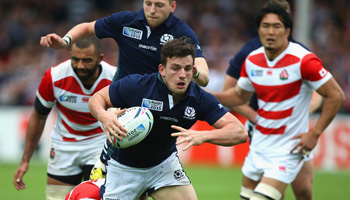 Japan were unable to repeat the heroics of the weekend as they were convincingly beaten 45-10 by Scotland at Kingsholm earlier today. The first half proved to be a hard-fought contest, but in the second it was all Scotland, as fatigue perhaps affected the Brave Blossoms.

Scotland scored five second half tries to claim the bonus point win and put them top of Pool B.

“We really put it to them in the second half,” said skipper Greig Laidlaw. “They were saying during the week that if they were in the game at half-time they were going to take us.”

Japan trailed 12-7 at halftime but the scoreline could have been worse if it were not for a sensational trysaving tackle just before the break. “Credit to Japan, they were awesome in the first game against South Africa and again they were really tough opponents.”

“I felt they [Japan] probably felt the four days today to be fair. We’ve got a good medical staff and they’ll be working hard over the next four days to get us back on our feet,” added Laidlaw, referring to their short turnaround before their next match against the USA on Sunday.