Scotland go back to back with tense victory over Ireland 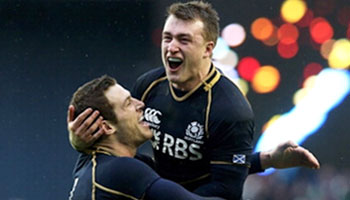 Scotland achieved a famous 12-8 victory over Ireland at Murrayfield, making it the first time they’ve recorded back to back Six Nations victories in over a decade. With two matches left to play, they still have a chance of winning the tournament.

Greig Laidlaw kicked Scotland to an upset win over an Ireland side that had the majority of the possession. Scotland held out and yet again showed that they’re capable of winning tight games at Murrayfield, as they have done with both Australia and South Africa in recent years.

Laidlaw slotted four second half penalties as they came back from trailing 8-0 after a Craig Gilroy try and Paddy Jackson penalty. With possession at almost 80% to the Irish, who had not lost at Murrayfield since 2001, Scotland tackled their hearts out and capitalised on opportunities.

Experienced Ronan O’Gara came on late in the game but an uncharacteristic moment of madness – a crosskick that almost gifted Scotland a try – led to a penalty for the hosts. With time almost up Ireland had a chance to snatch it, but the ball was fumbled and Scotland picked up the famous win.

Ireland coach Delan Kidney will now be staring down the barrel of a gun, while on the flipside interim Scotland coach Scott Johnson looks in a good position to possibly aquire the full time job.

Scotland are up to third place on the overall table behind Wales, who also have four points from their two out of three victories. England are unbeaten on top, while France occupy last place.

View highlights of Wales vs Italy | England vs France