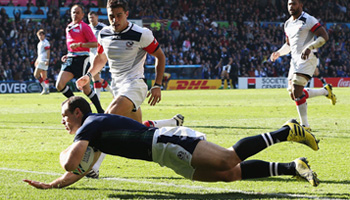 Scotland recorded their second consecutive win in the Rugby World Cup with a 39-16, bonus point victory over the USA in Leeds on Sunday. The USA put in a strong first half performance though, and actually led the match at half time.

In a nervy first half, it was the USA who dominated proceedings and led 13-6 at the break, courtesy of a 21st minute Titi Lamositele try.

With this and continued American waves of attack, the Scots were rattled and coughed up several try scoring chances in the opening 40 minutes. They would soon return after the break a more confident and clinical side.

Within two minutes of the restart, the comeback began in earnest for Scotland. Tim Visser finished off a superb backline move to go in at the corner before his fellow wing Sean Maitland crossed soon after.

A second AJ MacGinty penalty kept the USA in touch after 50 minutes but Scotland were not to be denied further scoring joy as replacement prop WP Nel barged over from short range.

Despite losing talisman fly-half Finn Russell to an unspecified injury, Vern Cotter’s side pushed ahead for the bonus point try. They got it through Edinburgh centre Matt Scott who powered over the line with 15 minutes left.

The States had the better of the Scottish pack in the first half, winning several penalties from the Scots’ set piece. But the introduction of Edinburgh props Nel and Alasdair Dickinson turned things round for Scotland.

Scotland got a fifth and final try through replacement fly-half Duncan Weir, capping off a second consecutive bonus point win. The victory ensures they remain top of Pool B as they prepare to face South Africa in Newcastle next weekend.

Scotland injury updates:
Second row Grant Gilchrist has since been ruled out of the RWC campaign with a groin injury. Gilchrist sustained the soft tissue damage in the 19th minute, and the recovery period is expected to extend beyond the competition. His replacement will be announced in due course.

Flyhalf Finn Russell sustained an inversion injury to his ankle, which will require further care and assessment, while other players have knocks that aren’t considered too serious.

British & Irish Lions guru Ian McGeechan has said that Warren Gatland would be top of his list, if England had to pick a successor to Eddie Jones 'tomorrow'.

How at 19, Manny Iyogun made transition from 105kg loosie to 115kg loosehead

It's now a year since Emmanuel Iyogun, the back-row-cum-prop, jumped off the deep end to ensure Northampton didn't have to forfeit a match.