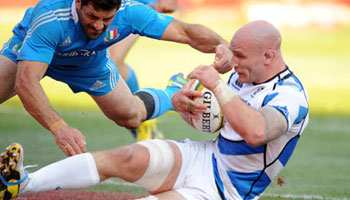 Scotland scored a last minute converted try to snatch a 30-29 victory over Italy in Pretoria on Saturday. The two northern hemisphere sides were competing for third place in the inaugural Quad Series in South Africa.

Flanker Alasdair Strokosch scored after the final hooter, giving Greig Laidlaw a shot at goal to sneak the win over their Six Nations rivals, and end the season on a high.

Italy started well with a first minute try to Leonardo Sarto, but Matt Scott cancelled that out soon after. Sean Lamont then crossed, before another penalty brought Italy back into the game.

It was all square at 20-20 at the break, before Alberto Di Bernardo’s boot gave the Italians what looked like a comfortable lead and a good crack at their first win of the tournament.

Strokosch’s dramatic late effort knocked the stuffing out of the Italians though, with Laidlaw’s conversion sealing the win. He has praised the youngsters for their efforts.

“The new caps were absolutely brilliant. I thought they were outstanding, every one of them. It has been tough but there is flip side to that coin. The young guys on the tour have put their hand up and they’ve given more depth to Scottish rugby already and they’ve only played in two or three Tests.

“We are disappointed at the performance but last week was a good performance and we were beaten. This week we did cross the line. It took us 80 minutes but we did it,” the skipper added.

South Africa won the tournament, winning all their games and beating Samoa 56-23 in the final.