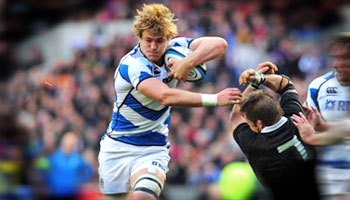 Scotland loose forward Dave Denton has been rewarded for his strong play against New Zealand with a starting spot this coming weekend against his former homeland, South Africa. He says he is relishing the physical challenge that the Springboks will bring.

Born in Zimbabwe but schooled in South Africa, Denton is more than familiar with some of the players he’ll be up against at Murrayfield this Saturday. “Every Test match is a massive game for me, but these are the guys I grew up watching,” he said.

“They were all over the press and they were the guys I always saw when I was growing up. In terms of personally challenge myself, it’s great, something I’ve wanted to do for a while.”

Denton was left out of the Scotland starting line-up after some below par club performances, but got his opportunity off the bench when Ross Rennie picked up an injury in the first half. He carried well and made an impact that sparked a series of good forward play from the home side.

He’s hoping that this weekend the Murrayfield faithful will see more of the same.

“I’ve always backed myself and I’ve always been open about backing myself. I knew that if I was playing well there would be a spot from me in the team. Fortunately, I did well enough against New Zealand to warrant a chance against South Africa, but I’m in no way taking it for granted.

“I know what the competition is like in the back row in this country. I like the look of the back row. It’s a big back row, and going up against their [Springboks] back row I think we need that.

“I’m looking forward to it. I know what I have got to do too. I’ve got to get out there, really challenge them physically, get the ball in my hands and make some tackles. They are big guys and they carry very hard. If we get bullied we will lose the game,” he said.

While Scotland conceded fifty points in a heavy loss on Saturday, one of the fans’ favourite moments was when big carrying Denton knocked over All Black captain Richie McCaw, a site very rarely seen over the course of his 114 Tests.

It was one of the most requested moments of the weekend, and while it wasn’t replayed at the time so we unfortunately only got one look at it when watching live, here it is again for those that asked.